Every photo has a story, and the story behind this photo of a 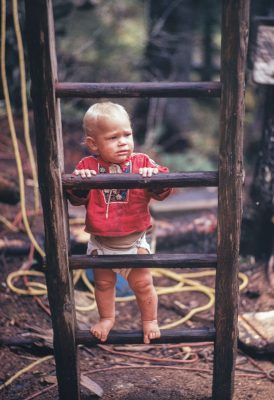 little boy, bravely scampering up a homemade ladder on an isolated stretch of Alaska coastline, is a humdinger. When I took this photo, back in the early 1970s, a back-to-the-land craze was in full swing in Alaska. We as a nation were in the final throes of the Vietnam War, flower children had lost their naiveté, and a lot of folks just wanted to cocoon, to be as far from the madding crowd as possible. In response to demand, the State of Alaska awarded five-acre homesites on remote state lands. The land grab was sort of a modern version of homesteading, when pioneers could claim 160 acres in returning for clearing the land. A young couple followed through on the opportunity, building a stout log cabin on the shores of rainy Driftwood Bay, around Cape Resurrection from the town of Seward and miles from the nearest highway. There they tended a huge vegetable garden, nurtured their baby, and using their small skiff, fished from the seas in front of their cabin. An outbuilding, barely high enough inside to stand up in, housed a vast collection of moldy books and a Vietnam War draft dodger who was long gone before I arrived there. They were slow to give trust, but finally they let me into their lives for an afternoon when I visited in a sailboat. Mom was named Ginger, but sadly I don’t remember the baby’s name. Months after my visit I heard the story. That brave baby was a bit too brave, fell and broke his arm. His parents needed to get him to a hospital, had no radio, so they left a note on their kitchen table. Heading for the hospital in Seward, they set off in their leaky little skiff around the stormy waters of Cape Resurrection, where clashing currents create steep waves that would daunt even a larger vessel. They never made it to the hospital, were never heard from again. A huge search turned up nothing. That child would have been in his 40s now, and all that remains of him is this slide, tattered by age. The beauty of Alaska is also its bane. This rugged wilderness can be deadly. Finding moments like these is one of the reasons I’m a photographer. Like so many of us, I have file cabinets and hard drives full of photos of special people and places.