This has been a time of retrospection, the end of a good year. I have used the quiet time to sort and keyword images, a massive job that has taken days. I have about 120,000 digital images that I can now put my hands on fairly quickly for clients or whatever. I have yet to get to the 50,000 or so slides and black and white negatives that represent decades of work before that. Compared to most professional photographers, however, I am not a prolific shooter. I typically think about each shot before I take it, a relic of my film days when each click of the shutter was a serious expense. In fast breaking situations, however, I’ll shoot a lot, for example last summer in Alaska when whales were breaching all around our boat, or in Africa in summer of 2012, when baby cheetahs frolicked only a few feet from our safari vehicle.

In my trip down memory lane, I’ve found that I’m drawn to favorite subjects. For example, I have over 8,000 photos of bears, both brownies and blackies. And those humpback whales? There are almost 3,000. Bodie, my favorite ghost town, has endured 3600 clicks of my various camera shutters over the last ten years. My home town, Coloma/Lotus, weighs in with over 16,000 digital images. I seem to be infatuated with icebergs, with almost 3,000 images of these otherworldly shapes. 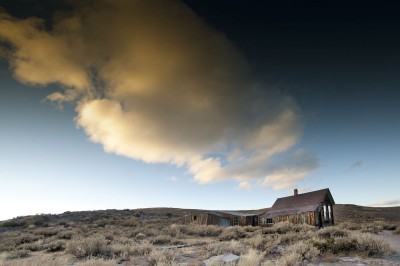 Yet, along with so many other photographers, I seem to charge headlong into the latest, newest set of images, forgetting that there are some beauties tucked away in those files. I am finding new (but old) treasures daily. Organizing really does help in these discoveries. Attached to this blog is a photo from 2008. I had overlooked it previously as it needed some tweaking. The photo is of an isolated cabin in the ghost town of Bodie. Bodie is a lonely desolate place, and I think this image captures some of that feeling. I darkened the sky and increased saturation, and for the cabin and sagebrush I used the Nik Color Efex filter, Tonal Contrast, one of my favorites. Hence, new technologies can breathe life into otherwise lackluster images. For photographers, it’s a beautiful new world.